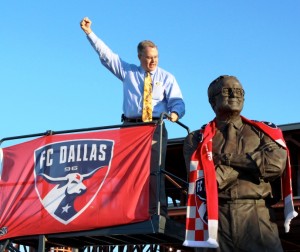 Lamar Hunt Jr. attended the FC Dallas home soccer match against the New England Revolution at FC Dallas Stadium in Frisco, Texas on Thursday April 5.  He participated in the FC Dallas traditional pre-game "scarfing ceremony" by placing an FC Dallas scarf on the larger-than-life-size statue of his father, the late Lamar Hunt, that is located on the north concourse of the stadium.  FC Dallas won the match (1-0) in thrilling fashion with a late-game goal by Ugo Ihemelu.  Lamar proclaimed that "it was a glorious evening at FC Dallas Stadium in Frisco, and a very exciting victory for FC Dallas!"  For more about FC Dallas Soccer, visit FCDallas.com.