Please, Stay at Home. And Yes, home is where the heart is.

No doubt many of us have been thrown for a loop with the spread of the Corona Virus or COVID 19. For many, our work life has been greatly altered. Ponder that Macy’s laid off most of their workforce (about 125,000 people) while the company was already in the midst of closing many stores permanently.

We can look at the reason for these events, but really, it’s better to look at the “here and now”. What is happening, and how can you cope?  Tragedy seems literally a breath away. 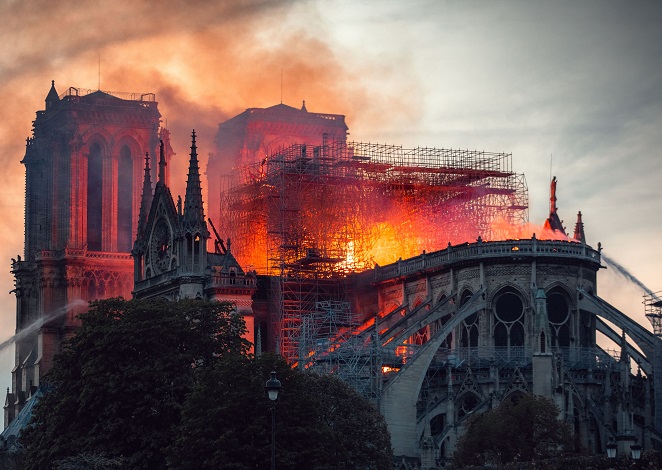 Here is a reflection from that event.

A Cathedral burns – and it wasn’t just any cathedral.

Imagine one of your most prized possessions, like your home, going up in smoke.  Although you were able to save some special mementos, you are in shock as to how this could have happened.  Notre Dame survived the Nazi occupation, Napoleon, and the Enlightenment, among many other threats. Then one day, during major renovations, it just catches fire and is nearly gutted. What can this possibly mean? Is it just an accident, a misjudgment on somebody’s part? How can this be?

Did people actually worship here or was it merely a tourist attraction – a place to tour as a historical site with a vague history, to most who walk in. Do they know that Christ is ever-present in the Eucharist in this Cathedral? Are they seeking him?

Do people actually go to Mass there and confession or is it just another stop on the Metro system or a pleasant walk over from some restaurant. “Hey, let’s go see Notre Dame, I hear it is beautiful inside!”

So, what is going on here? A picture shows the inside of the charred cathedral with a lone cross standing. What is God saying to us? Why just that cross, an icon, standing there as if it was staring at us?

Often in our daily prayers, we are prompted to consider what God might be saying to us through the events of the day. What were the significant moments of your day, and what could they possibly mean? What does this mean, that lone cross standing in the ruins of the cathedral?

My friends, an alarm has sounded and been going off for nearly a century. The bodies have piled up, society is grossly obscene, comfort reigns, and callousness knows no boundaries. Just think of human trafficking – I hope you are repulsed by the thought.  But we insulate ourselves and try to enjoy life – not thinking about the ugliness that surrounds us.  Few of us are seeking truth, goodness, or beauty. And then one day, a cathedral burns – a raging inferno – until a lone cross remains, standing in the charred ruins, before us.  That cross calls to us, cries to us, and implores us to consider its meaning.  Christ gives himself totally to us again and again, but we waffle – doing only what want we want to do. On we go to the next stop on the tour, the next adventure, the next . . . whatever. And Christ waits.  He suffers, but we are comfortable with a lifestyle that says, “please do not disturb.”

Don’t kid yourself – what happened when Notre Dame burned was monumental. It was radical. Something is afoot. Our Lady had said to us – so many times over and over – pray, fast, go to confession, and pray some more. The Rosary! Humble yourself . . . be silent and listen. Keep persevering. See the cross of My Son, Jesus Christ Crucified!

I must confess that these last few weeks, starting on March 16, put me into a depression. I just felt frozen in my shoes, unable to do much of anything. Some of it came to light as selfishness. I was like a passive-aggressive child who wanted to do what I wanted to do, so it became a bit of a vacation. On to the next thing, the next adventure, the next . . . whatever. Oh yes, I have prayed more fervently and even managed to go to confession, but what has struck me most is something I read in a book, “The Confession”, by John Grisham.  It has to do with Abandonment to Divine Providence.

In the book, a 19-year-old man named Donte Drumm is unjustly sentenced to death row. He comes from a loving, upright, God-fearing family, is a conscientious student/young man, and a great high school football player. How could this have happened? As a side note, John Grisham’s books are like listening to a great musical artist – natural, fluent, and resonant on many different levels. They show the beautiful and ugly sides to life in a very real way.

Anyway, our young man is further humiliated when he is placed in solitary confinement (something he didn’t deserve, for he is a model prisoner) in another facility and is in his cell now 23 hours per day with no TV. And he does despair. As if almost in shock and denial, he tries to sleep away the days and subsist on the meager food, somedays augmented by the five pieces of white bread that is necessary to get the prisoners their mandated daily 2,200 calories. After a time, he comes to his senses and develops something he labels “The Routine” – which is a completely new way of looking at the immense amount of time he has on his hands and how to deal with it. Sleeping, eating, and repeating that pattern all day long is just not working. He is not in reality.

Drumm begins a workout routine with a simple set of 20 push-ups. Then he adds sit-ups and running in place.  His routine includes getting up at the same time each day (5:00 a.m.), working out for an hour in his cell.  He adds a few steps to his routine – writing two letters each day, memorizing a verse or two from the Bible, increasing his exercise time, identifying and writing to new pen-pals, reading at least a book each day, and writing in a journal. Isolation was almost killing him, but reaching out to others gave him a completely new lookout on life. Yes, there are setbacks, but The Routine has helped him deal with the reality of his existence.

So what is it like for us – now that we are surrounded by materialism that can see outside our window but not enjoy?  Entertainment has become only accessible through a screen. Family members are closer now than on any recent vacation – and none can get much time apart from another.  What’s the message in all this?  It’s maybe that what’s consumed us is secularism. A world not built on the foundation of God’s word and deed, but on living for ourselves, for our own amusements and diversions. I think this is true for even those of us who thought we had a pretty good relationship with God – but have come to understand that we didn’t.  We have no routine, just the next stop along the way with whatever diversion might grab our attention. I was lukewarm, ready to be spit out. Instead of going from one distraction to another, I realize that I should be in the moment – God’s moment – and deal with it by abandoning myself to the moment.  Like Donte Drumm, I need to see the possibilities around me and embrace them – even if that means suffering. “Oh no, you mean we can’t go eat at our favorite restaurant tonight?”

Often in recent years, I have been encouraged by others to develop a “plan of life”, or a routine that has little room for variation. That core of that plan needs to be earnest prayer and meditation.  It also needs the study of things that matter and stick with you.  The inspiration of Donte Drumm sticks with me.

What else should that life plan include?  Generosity! Connect with people in a real way. Reach out to them. My sister told me that she is calling someone different each day just to catch up with them.  And what else should be in the plan?  Pass your love and energy on, by sharing it with others. Stop mulling about and do something that isn’t about yourself. This is a time for marriages to return to their core – a mutual gift of self to one another. For us to look out and see the pain and suffering of others, and then to help where we are able. To put aside childish pursuits, to put aside vanity, and to abandon our desires and to pursue the desires of someone other than ourselves.