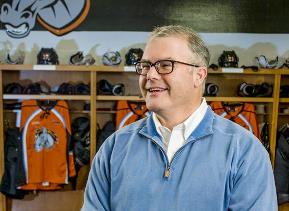 NHL Hockey, and Lamar Hunt Jr.:  Sports columnist Sam Mellinger of the Kansas City Star published an insightful article over the weekend on the future of NHL hockey in the greater Kansas City metropolitan area.

Sam analyzes the relatively strong and growing local interest and support in the Kansas City Mavericks of the East Coast Hockey League and how Lamar and the Mavericks organization is helping to build a support system for hockey that will increase the likelihood that an NHL team may eventually want to make Kansas City its home.  Here’s a quote from Lamar that’s cited in the article:

‘The NHL has vaguely mentioned Kansas City as a possible expansion market, and the Sprint Center’s lack of an anchor tenant makes this a natural question. But, as best I can tell, no one from or representing Kansas City will be among those submitting bids for a team to play here.  Lamar Hunt Jr., who owns the ECHL’s Kansas City Mavericks, a minor-league hockey team that plays in Independence, called the NHL’s $500 million price tag for an expansion franchise “a ridiculously big fee,” and said that he is not aware of anyone in Kansas City who will make a push for a team.  “No, it’s not on my radar,” he said. “It’s not on this team’s radar, and it’s not on my radar.”’

Here’s another snippet from the article:   “There are encouraging signs. Not just the attendance. During one game of the Stanley Cup Final, more people watched in Kansas City than St. Louis — which has an NHL team and much more of a hockey culture.

The Mavericks are making a particular push for millennials. In Hunt Jr.’s words, the goal is to “let them know this is a very cool thing to do, no pun intended.” The club is working on ways to do this, including with merchandise, a phone app, and perhaps something around the beards that hockey players have always fancied.”