This past November I traveled to the United Arab Emirates (UAE) as a guest of the UAE Ambassador of to the United States, His Excellency Yousef Al Otaiba. The primary purpose of the trip was to attend the Abu Dhabi Formula I Grand Prix race and finalize details for Major League Soccer club FC Dallas to do some pre-season training in the UAE at the Al Jazira Soccer Club facility. The Al Jazira Soccer Club (the name “Al Jazira” means “The Islands”) is owned by His Highness Sheikh Mansour Bin Zayed Al Hahyan who might be better recognized as the principal owner of Manchester City of the English Premier League (EPL). Sheikh Mansour is also the newest investor in the latest franchise in MLS (the New York FC franchise) and has partnered with the New York Yankees on this investment. New York FC is scheduled to begin MLS play in 2015 and will play their home games at Yankee Stadium until a site (preferably in Manhattan) is developed exclusively for the team.

The Abu Dhabi Formula I Grand Prix, and the surrounding activities, is an event on the level of the Super Bowl in the UAE. There were remarkable dinners with entertainment (including budding opera star Vittorio Grigolo) and, for those of us who were not familiar with the UAE, sightseeing. In one day alone (a Friday and the “Sabbath” for all those of a practicing faith) we went to church early in the morning at St. Joseph’s Catholic Church, went to a worship service at the Sheikh Zayed Grand Mosque (the third largest in the world), went up the Burj Khalifa (the tallest man-made structure in the world), and stayed at the Emirates Palace Hotel – perhaps the peak of all we experienced. 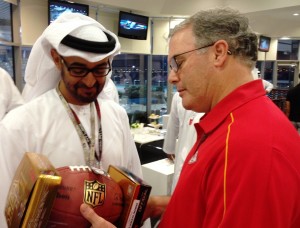 While there was a certain formality yet novelty to many of the things we did on the trip, our focus was on finalizing plans for FC Dallas to visit Abu Dhabi in February 2014 in order to play a series of friendly matches with professional teams and to conduct some of the team’s preseason training in the UAE. Since our visit, the announcement has been made about this first international soccer exchange of its type between an MLS team and the UAE.

As a token of thanks, I presented an NFL football, autographed by Kansas City Chiefs’ running back Jamaal Charles, to His Highness Sheikh Mohammed bin Zayed, the Crown Prince of Abu Dhabi, while at the Formula I Grand Prix race. He is the Deputy Supreme Commander of the armed forces, a leading member of the Abu Dhabi National Oil Company, chairman of the Abu Dhabi Council for Economic Development which has been developing initiatives to boost youth entrepreneurship in the UAE, and he has donated billions of dollars to charitable causes including research for polio vaccines for children and the UN Initiative to Fight Human Trafficking.

As I came away from my brief time in the UAE, I was struck by the hospitality and the generosity of the people we met. The UAE relies on many different people from a variety of cultural backgrounds and faiths to carry on the work of building a vision for the UAE, and the Hunt family hopes that the visit by FC Dallas of Major League Soccer will build new friendships and business relationships. We certainly look forward to FC Dallas training in the UAE in early February!